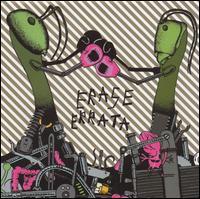 Their debut album, "Other Animals", was an instant classic. Originally released on the Troubleman Unlimited label in 2001 and later remastered by nu-no-wave figurehead and Flying Luttenbacher Weasel Walter, the album is a set of loose and tense punk rock tracks, flinch-and-you'll-miss-em spats of shattered-glass funk and punk-impacted pop experimentalism, it's an album with a winning sense of confidence that was described as "the pinnacle of fashion" by the NME.