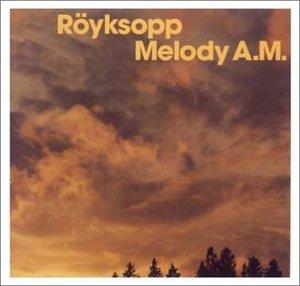 Melody A.M. is the debut studio album by Norwegian electronic music duo Röyksopp, released on 3 September 2001 by Wall of Sound. Songs from this album have been used in television adverts and computer games; "Remind Me" was formally featured in an advertisement for GEICO Insurance in one of their popular Caveman ads, while "Eple" was licensed by Apple and used as the introduction music for the Mac OS X v10.3 setup assistant. The Silicone Soul remix of "Poor Leno" was featured in the soundtrack to the 2003 snowboarding video game SSX 3. "So Easy" was the soundtrack of T-Mobile's launch advert featuring the face of a baby appearing around places in a city.