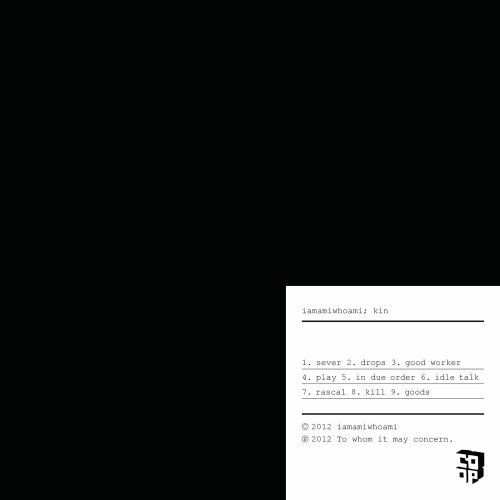 Kin is the project's first full-length album, about two years after releasing two series of music videos (dubbed the Prelude and Bounty series) on YouTube. The album was hinted on iamamiwhoami's channel via a cryptic video, "kin 20120611", which featured a blank sheet of paper kept within a noticeboard. The numbers '20120611' are actually a date, June 11, 2012, arranged according to the Swedish date format. Additionally, During the Grammis in 2011, an anonymous woman collected the 'Innovator of the Year' award on behalf of iamamiwhoami and opened an envelope to reveal a blank piece of paper, hinting that the album was in production since 2011.The album was eventually confirmed by Co-Operative Music.Unlike most traditional albums which only release singles after the album is out, singles from Kin will be released on their YouTube channel, with a new song and an accompanying music video every two weeks. The music video is released one day before the single.The series of music videos from Kin follow a storyline featuring Jonna Lee, the creator and face of the project, along with several hairy figures which serve an unknown purpose thus far.
Kin gained attention on the internet due to a viral marketing campaignbeginning since 2009. The album was nominated for "The Best Tease of the Past 12 Months" category by BBC Radio's 6 Music Blog Awards, with fellow contenders being Lana Del Rey, Elliphant, Battlekat, Savoir Adore and The Sound of Arrows. On March 2nd, 2012, they were announced as the winners for the award. iamamiwhoami then made their first large airplay debut in the United Kingdom with their track, "o" after the announcement.Kin was acclaimed by the co-creator of the American animated televion series, Avatar: The Last Airbender. Konietzko commented, "Watching all of their videos and their site-specific performance is like getting a rare view into a world where art isn’t hindered by economics and time constraints. I want to go to that world." Each time a new single is released, iamamiwhoami emails various music blogs to alert them and there are no accompanying press releases or offers of interviews.
Lyrics from the tracks of the album were given as responses to questions posted in an interview with Bullett Magazine. The article also features a photo shoot featuring Lee posing in parts of a forest, and a room filled with machinery.
On May 25 2012, rumors began to circulate that iamamiwhoami were still shooting videos with the announcement of 9th single "goods", originally intended to be exclusive to the album. iambountyfan stated that kin had been pushed back to September 4 2012 on their Facebook page, all of which was untrue. Release dates continued to fall in line with their original intention, "goods" having a tentative release of June 5, 2012.