This is my third review of a Pink Floyd's album. "Animals" belongs to the famous trilogy of the greatest masterpieces of the band, starting with their eighth studio album "The Dark Side Of The Moon" released in 1973, followed by their ninth studio album "Which You Were Here" released in 1975 and ending with "Animals", their tenth studio album released in 1977. It was recorded at the band's studio, the Britannia Row Studios, in London, and was released by Harvest Records in the UK and by Columbia Records in the USA. With the exception of "Dogs", which was co-written with David Gilmour, all the five tracks on the album were written by Roger Waters. Curiously, "Animals" was the band's first album not to include a writing credit by Richard Wright. Those were probably, the early signs of discord inside the group, which several years later would culminate with Wright leaving the band, due to problems with Waters.

"Animals" has five tracks. The first track "Pigs On The Wing" is divided in two parts, and is the smallest track on the album. "Pigs On The Wing (Part 1)" opens de album and has only 1:25 minutes long and "Pigs On The Wing (Part 2)" closes de album and has precisely the same time. "Pigs On The Wing" is a love song written by Waters for his wife, Caroline, at the time. The message of this song is that when two people love each other, they can protect themselves from the evils of the world, referred on the other three songs. Waters refers to himself as a dog in the second part of the song. Musically, the song is simply constructed and features no instrumentation besides an acoustic guitar played by him. The second track "Dogs" is the lengthiest song on the album. Gilmour and Waters share vocal duties on the song. Gilmour sings the majority of the song, but Waters sings the last two verses. During the theme, we can hear the Wright's synthesizer solo and the sounds of dogs barking, on the back. Gilmour made brilliant mixes, with acoustic and electric guitars, together. The third track "Pigs (Three Different Ones)" is the heaviest track on the album and is a song more in the rock vein. It's the most aggressive song on the album and has very aggressive political lyrics, too. Halfway through the song, Gilmour uses a "Heil Talk Box" on the guitar solo, to mimic the sound of the pigs. The fourth track "Sheep" is probably my favourite song on the album. It has a delightful Wright's keyboard work, while Waters sings and plays rhythm guitar and Gilmour plays an outstanding bass guitar brilliantly on a simply and amazing way. For a Pink Floyd's album which is so clearly dominated by Waters, the Gilmour's guitars dominate throughout the album, but we have also the Wright's keyboards rarely rising above a mood-setting on the background.

Conclusion: For many of you, "Animals" is probably the last album released by Pink Floyd that can achieve the status of a masterpiece. Sincerely, I don't completely agree with that point of view. I really think that we can't forget their famous eleventh studio album "The Wall", released in 1979 despite is probably an album less progressive than their three previous studio works. In any case and in my humble opinion, "Animals" is one of the three best albums of the group, and one of the best albums ever made, in any time, by any band. Anyway and undoubtedly, "Animals" is one of the Pink Floyd's lesser known albums and is for sure the less known album of their trilogy. Of course it's not as easily accessible as "The Dark Side Of The Moon", it's for sure less personal than "Wish You Were Here" and it has a less interesting story and less familiar songs than "The Wall". It's shorter than most of the Pink Floyd's albums, too. But it's surely a great Pink Floyd album and that can be considered a true landmark in the progressive rock music. By the way, please read "Animal Farm", if you didn't read it before. It's a great novel which never gets old with the years. 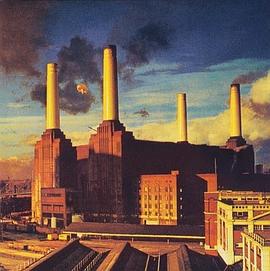