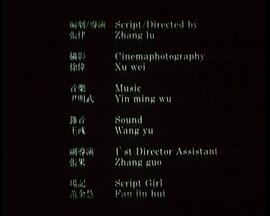 Eleven, which played at the 2001 Venice Film Festival, is the first short film of director Zhang Lu. He is a forty-year-old writer whose works engage with issues of cultural difference stemming from his own background as a member of the Korean cultural minority in China. Eleven is a fourteen-minute long vignette, virtually silent, of an eleven-year-old boy's encounter with a group of soccer players his own age. Set in an arid, post-industrially ugly wasteland dominated by a vast slag heap, the film opens with the boy and an older man, who might be his father, emerging from a railway tunnel and arriving near a small hut. The man replaces a light bulb (shown in extreme close-up), settles himself into a chair outside, and seems to fall asleep. The boy sets up a few rocks as goalposts, and watches a group of kids appear with a soccer ball. They practice; he fetches the ball. He watches from the slag heap. They call him to play goaltender. He stands, oddly passive, as they score through his legs. They yell at him; he kicks the ball through his own goal. They pile on top of him and seem to beat him. At night, he digs a hole, and puts the ball in it.. The man, now awake, arrives with a massive bulldozer, and fills the whole with dirt. Credits roll.
There is no dialogue: just shouting boys, and occasional scraps of quietly effective atonal music on the soundtrack. The camera barely moves: most scenes are filmed in a single long take, at a substantial distance from the action. The director's eye and sense of timing feel masterful: framing, of tiny figures against grim, ugly industrial backgrounds, manages to be starkly, almost classically beautiful. Scenes are cut to an idiosyncratic rhythm that is provocatively slow, yet feels absolutely right. There is something here reminiscent of Chen Kaige's King of the Children (Haizi wang, 1987): a monumental, iconic use of visual symbolism, and an appreciation of the power of silence and emptiness that can, paradoxically, fill a screen with a sense of poetry