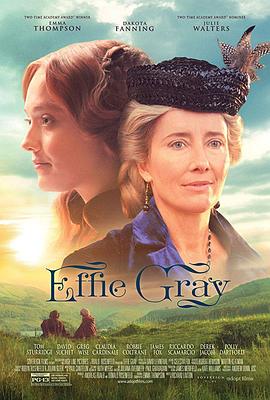 John Ruskin是英国维多利亚时代的艺术家、诗人、建筑师、思想家，还扶持培养了一批年轻艺术家，不过成为社会新闻的却是他与Effie Gray的婚姻，两人结婚6年之后Effie要求中止婚姻，理由是两人“从未真正成为夫妻”，这桩官司成为一时谈资。John Ruskin承认两人从没上过床，但为自己辩护说妻子的“某种状况”破坏了他的激情。Effie Gray离婚后，嫁给了受John Ruskin重视提拔的画家John Everett Millais。据艾玛·汤普森说，这部新片将从两人的新婚之夜开始，通过John Ruskin的经历和性格来解开这个谜团。
2011.08.17.达科塔取代西尔莎成为《Effie》女主角.
Dakota Fanning replacing Saoirse Ronan in Emma Thompson's 'Effie'
August 16
Source: Deadline
Just last November, one Casting Tidbits update revealed The Lovely Bones star Saoirse Ronan landed the title role in Effie, a biopic about Effie Gray, the wife of English art critic John Ruskin, who became entangled in a famous Victorian love triangle. Now Deadline reports Dakota Fanning will star in the period drama from writer/actres****a Thompson which chronicles the strange romance, or lack thereof, between Gray and Ruskin. Despite her beauty, Ruskin was said to be disgusted with Gray's body, did not consummate the marriage and annulled it, allowing her to marry Ruskin's protégé John Everett Millais.Though Orlando Bloom was once attached to play Millais, apparently Tom Sturridge (Pirate Radio) has stepped into the role. In addition, Thompson will also star in the film as Lady Eastlake, who takes Effie under her wing when it becomes clear the union was destroying the young woman. Her husbandGreg Wise (Johnny English) will play Ruskin while Julie Walters (Harry Potter franchise) and Derek Jacobi (The King's Speech) will play his parents. Finally, Edward Fox (Gandhi) is in talks to play Eastlake's husband Sir Charles a man who was not only fed up with Ruskin and his radical ideas, but also the main patron of the Royal Academy which held sway over what constituted fine art.
Richard Laxton (An Englishman in New York) is directing the film which begins shooting in Scotland on October 17th with shooting to follow in London and Venice as well. The cast has been shuffled on this project for awhile with Carey Mulligan once attached to the title role as well, but a copyright infringement claim held up the film, which resulted in scheduling conflicts for the previously attached cast members. Producer Don Rosenfeld says, "It’****a Thompson’s first original script after doing several fine adaptations, and it gets to the heart of Victorian England." Though this sounds a bit more along the lines of her work on Sense and Sensibility as opposed to Nanny McPhee, her work on the page should make for a great British drama down the road.