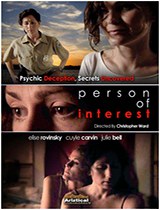 Three professional women have disappeared from a small New England town in a period of just 18 months. Sheriff Nickie Welles, who has learned that state budget cutbacks will soon eliminate her job, is determined to find out who's behind these terrible crimes. In an act of desperation, Nickie asks James Hart, a local psychic, to help solve this tragic mystery before her tenure comes to an end. However, Detective Sandra Franks, Nickie's lover, believes James is a fake and that her girlfriend is in over her head. James has problems of his own. Troubled by a sleep disorder, he checks himself into a hospital where he meets an oversexed nurse who will become the next victim of these mysterious crimes. James suspects someone is out to frame him. Could it be Sandra? Ultimately their investigation will uncover a terrible secret that will bring Nickie, James and Sandra to the brink. From award winning documentary filmmaker Christopher Ward.