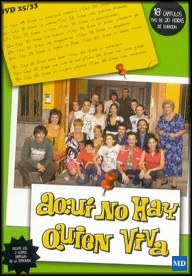 Aquí no hay quien viva (Spanish, 'No One Can Live Here' or, translated more freely, 'This Place is Awful') is a Spanish television comedy focusing on the inhabitants of the fictional building in Desengaño 21, Calle Desengaño being a street between the Districts of Gran Via and Chueca in Madrid. The episodes debuted on the Antena 3 network, and were later rerun by the same network as well as cable/satellite channels Factoría de Ficción and Paramount Comedy. Antena 3 Internacional satellite channel broadcasts the series to Latin America. The series debuted in 2003 and became popular thanks to its funny characters and witty script.