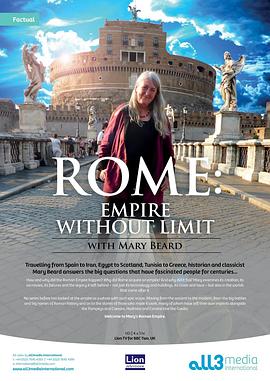 In this four-part series classicist and historian, Professor Mary Beard draws on her immense scholarship, unique viewpoints and myth-busting approach to Roman history, to give her definitive take on the Roman Empire. Travelling from Spain to Iran, Egypt to Scotland, Tunisia to Greece, she‘ll pose the big questions that have fascinated people for centuries: how and why did it happen?
In search of answers, she‘ll take viewers to the most telling sites and the most revealing artefacts - from the remnants of Roman ships at the bottom of the sea to miraculous letters preserved on ancient papyri. And she‘ll examine the legacy the Roman Empire has left behind - not just its technology and buildings, its roads and laws – but also in the worlds (religious and imperial) that came after it.