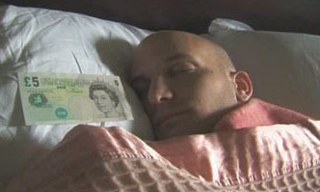 近期National GEO台的真人秀，Leon每天5镑，每天吃喝住行加在一起只有5镑，从英国开始，开始要饭和流浪汉一样的另类旅行节目！
sonychen 推荐
PS. 第一季度，流浪英国，路线如下：London-victoria bus-national express-40p banana-Cambridge-Nothinham-Sheffield(betting 3 questions for free tkt)-york(想用第一个信封锦囊，结果5镑得了个便宜住处)...-London；第二季度，流浪美利坚，每天五美金，美国更大，人更亲切哦~
---------------------------------
'Amazing Adventures of a Nobody' is a documentary/factual entertainment TV series that follows Leon, the presenter, on his travels around the UK on just 5 pounds a day. The 5 pounds has to cover food, accommodation and travel; the 5 pounds reflecting the average hourly wage according to the Department of Trade and Industry in the U.K. Leon had certain cities he had to pass through and was only ever allowed to stay for 24 hours in each city. The 5 pounds could not roll over and had to be spent, with each morning being presented a new five pound note for each new day. The public could buy him things and he could work for goods, but was never allowed to be given money directly. The results were truly amazing, hence the name, with our "nobody" meeting some fascinating people such as Jack the lobster fisherman in locations as grand as Lord Glasgow's Scottish castle and as beautiful as the Welsh Coast. Written by Jorien Klaver