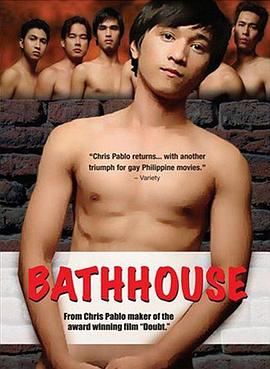 "Bathhouse"
The Gay Philippines
Amos Lassen and Cinema Pride
It seems that this month the Philippines is releasing a lot of gay movies. We have "Paper Dolls", "Circles" and now "Bathhouse". "Bathhouse" uses characters to tell the story of what gay life is in the Philippines.
Those of us that have experiences bathhouses know that they are places where we can go for sex with no inhibitions. You go in, take off your clothes, wrap a towel around your waist and indulge in hedonistic pleasure. The bathhouse is a world unto itself--a world of sex, sex and more sex. Words are seldom spoken and all it takes is a glance or a motion to initiate the most primal of our instincts.
While at the baths one night, Rico (Ray An Dulay), a young student and somewhat of a nerd, meets Chris (Jet Alcantara) and the chemistry between the two is like magic. Rico thinks he has found his Mr. Wonderful. Instead he finds himself on a path of cheating and envy with a little love thrown in for taste. Chris seems to love the baths more that he loves Rico. A bathhouse is not exactly the place one looks to find love.
"Bathhouse" shows the reality of what goes on in the gay underground known as "The Tubs". Rico, who looks like a youngish Jackie Chan, discovers that he is gay and joins the membership of the local bathhouse thinking that he will find both true love and himself there. The object of his admiration, Chris, is hunky and knows it and like most men that frequent bathhouses wants to share his body with as many men as he can.
I naturally assumed that a movie entitled "Bathhouse" would be about what goes on in a bathhouse but this movie was ore than that. Crisaldo Pablo, the director, goes a little further in depicting the gay scene of the Philippines. He also shows the real life of the people and the different ways that they meet--through the internet, at the public park, through ads, etc. It is an exciting picture of the islands and shows gay life there as we have not been privy to.
The acting and the cinematography are first rate but the story could have been developed a bit more. All in all, I liked the film a great deal and am glad that I got to see it and hope that all of you will watch it as well. It is always good to learn about gay life in other places and this movie gives an accurate picture of gay life in the Philippines. I did have one problem with the film and that is that after Rico left his parents, he did not go looking for a job but somehow he managed to have money to join the bathhouse and have a lot of sex without seemingly spending a penny. I just wonder if money is needed in the Philippines. AIDS was also not mentioned in the film and we do know that AIDS is a universal problem--bathhouses in the United States were closed because of AIDS but it seems to be not a problem in the Philippines.