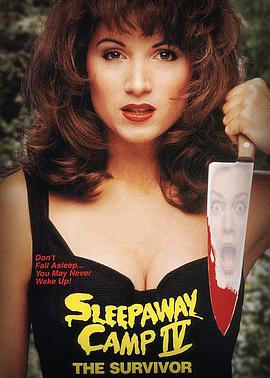 Alison (Carrie Chambers), a survivor of the Sleepaway Camp trilogy, is being plagued by nightmares which gruesomely force her to revisit the Sleepaway Camp. Unable to recall the actual occurrences due to a forced mental block, she seeks the help of a psychiatrist in overcoming her insomnia.
After numerous visits and hypnosis, Alison's psychiatrist advises her that she is a survivor of a massacre which occurred at a camp over a decade ago. Her disbelief for the whole situation inclines her doctor to advise her to return to the site for an afternoon, in hopes that if she were to see the scenes of the crimes, she would remember them and overcome them.
Doubtful, Alison sets out for the camp she attended but never remembered. When she reaches her destination, she finds the camp to be closed and abandoned, the land now Federal Property. Her first acquaintance is a forest ranger, Jack (John Lodico), to whom she explains her reasons for being there. Raising her fears, he explains that there were, in fact a series of murders committed at the camp site ten or so years ago, and that the murderess, Angela, was never caught. He also notes a slight resemblance between Alison and Angela.
As Jack tours her through the campsite, the places seem to come back to life for Alison, and memories of brutal murders now invade her mind. Visibly exhausted by the mental strain from the afternoon, she asks Jack if they can eat some lunch together. But Jack has more on his mind than lunch when he takes Alison back to his cabin. When Jack attempts to attack her, she grabs a nearby knife from his kitchen and raises it as if to stab him. She, nearly as frightened as Jack with her murderous instincts, flees the cabin half-dressed and hysterical, realizing that she may be Angela and not even know it.
In the forest, she is grabbed by two large hands. Expecting the hands to be Jack's, she is surprised to meet Eugene (John Gallhager), a large, oafish hunter. After the enraged Alison explains her situation with Jack to him, Eugene vows to help her "take care" of him. Eugene has reasons of his own for disliking Jack - being a hunter. Jack has always tried to keep him off the property which Eugene's family has hunted on for generations.
Alison sets out to find Jack, with Eugene, after a terrible night's sleep where even more nightmares lead her to believe she is Angela. They break into his cabin expecting him to be asleep, but instead find him dead. In a hysterical fit, she blurts out that she fears she killed Jack in the night and can not even remember it. Eugene, now afraid of her, flees the cabin and runs into two nearby campers, David (Victor Campos) and Annie to whom he frantically explains that there is a murderer on the loose.
Meanwhile, Alison does some exploring of her own that afternoon and relives more scenes from the past. Exhausted, she lies down to rest, lapsing into another bad dream. She jolts awake and begins running through the forest toward her car. When she reaches it, Eugene is waiting for her in it - dead. In a climactic fit of rage and terror, she turns to find herself face to face with David and Annie, the campers.
Consoling her, they ask her to tell them exactly what happened. David, an intellectual, listens carefully and surmises that Alison probably is Angela. The more excitable Alison gets in her storytelling, the more quietly David tries to steal away from the two women. Annie sits and listens only with a smirk on her face. When David finally makes a move to flee, a knife is hurled at him through the air landing in his forehead. Alison, fully aware this time, knows that she did not do it. Terrified, she faces Annie, who she now remembers to be Angela from camp. Unfortunately for Alison, there is no escape from Angela.