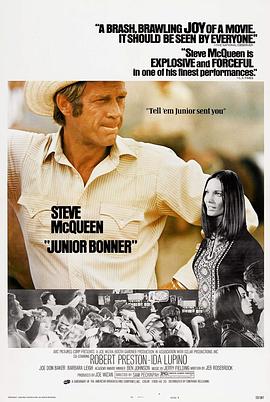 Junior "JR" Bonner is a rodeo rider who is slightly "over the hill". Junior is first seen taping up his injuries after an unsuccessful ride on an ornery bull named Sunshine.
He returns home to Prescott, Arizona for the Independence Day parade and rodeo. When he arrives, the Bonner family home is being bulldozed by his younger brother Curly, an entrepreneur and real-estate developer, in order to build ranch homes.
Junior's womanizing, good-for-nothing father Ace and down-to-earth, long-suffering mother Elvira are estranged. (Note: both Preston and Lupino were born in 1918, making them just twelve years older than McQueen.) Ace dreams of emigrating to Australia to rear sheep and mine gold, but he fails to obtain financing from Junior, who is broke, and refuses to ask Curly for it.
After flooring his arrogant brother with a punch, Junior bribes rodeo owner Buck Roan to let him ride Sunshine again, promising him half the prize money. Buck thinks he must be crazy but Junior actually manages to pull it off this time, going the full eight seconds on the bull.
Junior walks into a travel agent's office and buys his father a one-way, first-class ticket to Australia. The film's final shot shows JR leaving his hometown, his successful ride on Sunshine continuing to put off the inevitable end of his career.