-you awake?
-yeah.
-i was just thinking, um,
it wasn’t a chemical imbalance, and it wasn’t drugs and alcohol,
i think, um,
it was much more that i had lived an incredibly American life.
this idea that if i could just achieve X and Y and Z, that everything would be okay.
there’s a thing in the book about how when somebody leaps from a burning skyscraper,
it’s not that they’re not afraid of falling anymore.
it’s that the alternative is so awful.
and so then you’re invited to consider what could be so awful
that leaping to your death would seem like an escape from it.
i don’t know if you have any experience with this kind of thing,
but it’s worse than any kind of physical injury.
it may be in the old days what was known as a spiritual crisis,
feeling as though every axiom in your life turned out to be false,
and there was actually nothing,
and you were nothing.
and that it’s all a delusion and you’re so much better than everybody,
cause you can see how this is just a delusion.
and you’re so much worse because you can’t fucking function,
it’s really horrible.
i don’t think that we ever change.
i’m sure that i still have those same parts of me.
guess i’m trying really hard to find a way not to let them drive, you know.
hey, um, okay, good night.

When i think of this trip, i see david and me in that front seat of his car.
we are both so young.
he wants something better than he has, i want precisely what he has already.
neither of us knows where our lives are going to go.
it smells like chewing tobacco, soda and smoke.
and the conversation is the best one i ever had.
david thought books existed to stop you from feeling lonely.
if i could, i’d say to david that living those days with him reminded me what life is like instead of being a relief from it.
and i’d tell him it made me feel much less alone. 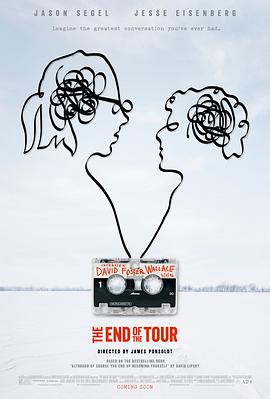