原文：
http://www.vulture.com/2015/07/bojack-horseman-season-two-raphael-bob-waksberg.html?mid=twitter_vulture
I've been thinking a lot about episode 11, where BoJack hooks up with Charlotte's teenage daughter Penny. It's like, Oh, you're maybe even worse than I thought.
[Pause.] Yeah. He did some pretty shitty things in that episode. It's very much one step forward, two steps back; three steps forward, four steps back; eight steps forward, maybe only five steps back. One of the early conversations I had with Michael Eisner [who owns BoJack backing company Tornante] was about what kind of show this is, what we're saying about BoJack. And he said, "Oh, the idea of this character is that he goes right up to that line and doesn't cross it," and I said, "No, what's interesting is that he does cross the line, and then he crosses back, and then he crosses again." You're kind of rooting for him, but you're kind of not.

Are there stories where the writers' room conversation becomes, "Is this maybe too far"?
We were really precise with episode 11. There was a lot of talk of how unclothed the characters would be, what step in the process is [Charlotte] walking in on. So, yes, there are things that feel like they're too far — but sometimes it's important to push yourself onto that ledge. When I first pitched the episode, it was that BoJack goes to New Mexico and gets involved with the family, and he sleeps with Charlotte. And as we were breaking the episode, someone had the idea of, what if it's the daughter? And at first we were all like, "No no no, we can't do that." But the more we thought about it, the more it made sense — and the more it was in our heads, and it felt almost cowardly not to go that far … I'm sure we lost people over that episode. But that's okay; it's not for everybody.

I was sort of torn about that episode because we heard Kelsey even say, "BoJack is stunted," and we know he's sort of unable to mature. But also, why would anyone think it's okay for a grown-up to be someone's date to a prom? There's something really fucked up about that in the first place.
Yeah, BoJack doesn't see himself as a grown-up. He doesn't think he's a 50-year-old man. And because he's a cartoon horse, our audience doesn't think that either. So it's fun to remind them: He is a grown-ass adult. He's 51. He doesn't get how inappropriate that is.

Let's talk a little about Wanda. How early in the character's development did Lisa Kudrow sign on?
She took the part because she read episode two and thought it was funny, so we knew who Wanda was at that point, and we knew what her arc was going to be. But then when you get Lisa Kudrow and you hear her say lines, she's very fun to write for. That affected the way we wrote the character going forward ...
She was coming in [for table-reads] while The Comeback was airing, so I got to geek out with her. I love that show — you can see that show's DNA on BoJack if you're looking, and not even closely.

Wanda's mulch joke really caught me by surprise. When you're breaking that episode, how did the decision arise to use a brick joke?
You know how Broadway composers have their "trunk songs"? I have a handful of bits that are sort of my trunk bits — going about in life, you have a moment and you think, Oh, I'd like to use that in something. Like the movie-star speech Rutabega gives Princess Carolyn: I've given similar speeches to friends who are heartbroken. The Zoe/Zelda thing in season one came from a Tia and Tamera observation I've had for a while. So the mulch joke is a similar variation in a brick joke that I love — but we had to change it a bit because the original joke involves animals, and it wouldn't work for our show. But I've had this idea for a while, that I want to do a story where there's a question about a relationship, and this joke hammers in those ideas of, is this someone I want to be with? And then later on they deliver the second half of it, and it works as a metaphor for everything: Oh, there's more to this person than I realized. It's a nice reveal.

You mentioned that you couldn't use an animal-oriented joke. Is that how this season's episode "Chickens" came about? How rigid is the show bible about which animals exist?
We're working on it as we go along. But very early on we decided that all the animals are animal-people. No one has pets. There's no little birds flying from tree to tree — it's a world full of Goofys, not Plutos, to use a Disney analogy. In season one I was really hesitant to depict meat-eating in any way. But then someone pitched a joke with a cow waitress serving steak and being really offended. And it was funny, so we put it in, but then it raises questions. So in the back of my mind I knew, somewhere in season two we're going to have to explain where meat comes from. And the horrifying answer is it comes from animals. And what's really funny about that is that it's kind of horrifying in the real world, too, but we try not to think about it.
In season one we didn't want to show a lot of underwater animals because we thought, Well, they live underwater, they can't breathe air. But then we had Tom Jumbo Grumbo the whale, and Sextina Aquafina the dolphin, and Neal the seal, so we thought, Okay, well we can have mammals because they can breathe air. But still no fish. And then we had a joke about an electric eel with a Taser, so we chucked that rule about the fish. So now we have Abe the Catfish with his water bottle, and now you see a lot more aquatic creatures.

Season one felt like it was largely about depression, and this season felt a lot more like it was about loneliness and the quest for connections. Do you think the show believes in love?
I guess what you're asking is, like, do I believe in love. The show believes what I make it believe, right?

But you don't believe in animal-human hybrids walking the earth, and the show does. There's some distinction there, no?
I think the show believes in love but it's very suspicious of happy endings — that fade to black, you got the guy, the girl, the prince rescued you from the dragon, and we don't need to see anything else. Like anything, it's hard and it takes work, and you gotta do it every day. That's the message of season two.
[...] You could be with the perfect person but still, every day, part of you is thinking, Could I do better? Is this what I'm doing? And then other days it's, I'm a total mess, how could anyone deign to tolerate me? I'm so lucky to have this person and feel so connected, and we get each other and fit in like puzzle pieces. I don't think anyone feels that way all the time. Or maybe some people do? But I'm not hoping for that in my life, I'm not expecting that. I think expecting that leads to madness. And if I can have a TV show where I don't posit that that is the goal, if I can push out a message about love through my art, that's what it would be: a small asterisk saying,"It doesn't always work this way," in a sea of stories saying, "I was miserable because my boyfriend was bad, but then I found a boyfriend who was good and now I'm happy forever."

So what might we be able to look forward to in a season three?
You're stressing me out. I read everything [people write about BoJack], and people have been very kind, and getting what we do. But it terrifies me because now we're at the top of the roller coaster, and now the backlash begins. So, what are my predictions for season three? It's that everyone's going to hate it because it's not like season two, or everyone's going to hate it because it's just like season two. That's my prediction for what all future seasons will be, or anything else I do from now on. I've hit my peak, I've finally gotten acceptance for my strange little horse baby, and now that I've gotten acceptance, the pitchforks come out.
My current state is simultaneous jubilation and terror. How wonderful, I'm being accepted for the weirdo that I am — and it's only a matter of time before they see the weirdo that I really am. It's too good. I'm very suspicious. It feels like a prank! I feel like I'm in She's All That and it's a dare, and the whole world has agreed: "Let's make this guy think we like his show, but actually it's just a bet and he's just a kid with glasses." Is that the end of She's All That?

No, it has a happy ending. You're thinking of Carrie.
Oh, that reminds me of my favorite joke from the season that got cut for time. In episode six, where Todd and Mr. Peanutbutter are talking to their accountant, and he's telling them they don't have any money left. The accountant says, "You're more in the red than Carrie on prom night." And the original line back was Todd saying, "You know, my friends say I'm a Carrie but I think I'm more of a Miranda."

附：这季最重要的对话之一：
Mr. Peanutbutter: “You’re a millionaire movie star with a girlfriend who loves you, acting in your dream movie. What more do you want? What else could the universe possibly owe you?!”
BoJack: “I…want to feel good about myself. The way you do. And I don’t know how. I don’t know if I can.” 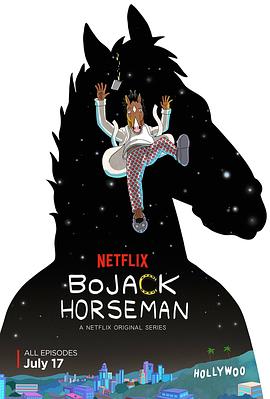