This was the last line of our beloved tenth doctor--DT.

I don't really want to let you go!

My opinion is quite different from the previous one. I absolutely loved this special, especially the last 20 minutes.

It had been a while since I found out DT and RTD (Russell T. Davies) were going to leave Doctor Who for good, but when it was the time to say good-bye, I realized how much I didn't want them to go.

If you have watched DT's Doctor from season 2, you would understand how difficult it must be for him to say final good-bye to each one of his companies. This time when he said good-bye to everyone, it was really his final good-bye.

He saved Martha and Mickey, who were happily married since we last saw them.

He saved Sarah Jane Smith's son. After all these years, Sarah Jane still had a deep affection for him.

He visited Captain Jack in a pub and introduced him to Alonso. Captain Jack had been a wonderfully "side-kick" for him.

He didn't talk to any one of them. In fact, he didn't really need to. I believe all of them knew it was doctor's last good-bye.

He went to see Joan Redfern's great grandchild, who wrote a book about how her great grandmother fall in love with the human doctor .
"Was she happy...in the end?" the Doctor asked.
"Yes, yes, she was."

I suppose he owed her great grand mother an apology, even it wasn't entirely his fault. Maybe finding out the she was happy in the end made him less guilty of what he did to her. (watch season three episode 8 and 9).

Last but the most important person in his life, the Doctor visited Rose. He had to! They met for the last time in 2005 01 01, even before they were supposed to meet for the first time--the tragedy of being a time lord.

"tell you what, I bet you are going to have a really great year!"

In the end, everything came to where it was meant to start.

This is the last good-bye, not only to DT as the Doctor, but also to Rose, to Martha, to Mickey, to Sarah Jane, to Captain Jack......

I bet none of these people wanted to go either, but we know it is our farewell to them.....

P.S. I have seen Matt Smith's new Doctor, not fond of him yet, but good luck Matt!
12 有用
1 没用
点击展开全文 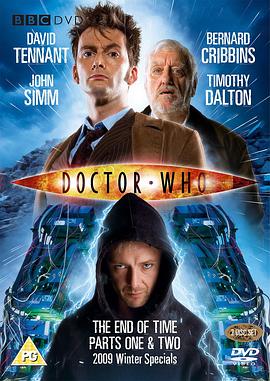