Magnolia
2009-09-01 看过
提示：这篇影评可能有剧透
I've never even heard of Honokaa before I watched this movie accidentally on the plane, and this Hawaiian island will probably remain unknown to me forever if I didn't watch this film. Such an ordinary story that happened in an ordinary little town unexpectedly gave me two hours' peaceful thinking. It's as if I myself have taken the same journey through mind.

Obviously incapable of taking care of himself, Leo was fortunate enough to know Bee, who was willing to cook dinner for him every day. Watching Bee cooking is an absolute enjoyment. I always thought cooking is an art, and Bee no doubt is the most natural artist in this area. With the melody of old-time Japanese songs, Bee, Leo and the rest of the folks together created pictures of simple happiness. However, this joy is very fragile for it's settled on an isolated island. Like Leo said, "There are dreams and there is reality." When reality comes, whether you like it or not, you'll have to take it all in.

An old man named Koichi died, leaving behind his wife, who had Parkinson's diseases. There were tears at the funeral, for the first time in the movie, but it wasn't anything grave. It's a very slight sadness, like a sigh, breathing out slowly the burden of life.

Leo met a beautiful girl Mariah, with whom he had some very sweet time, but in the end, it turned out that he's only a transient replacement after Mariah's usual fight with her boyfriend. Bee felt left out because of Mariah's appearance and her eyesight suddenly dropped down dramatically. At this moment I began to understand Bee, a woman who lost her husband 50 years ago and spent all these years lonelily cooking for her cat. Leo's existence gave her great comfort and warmth. It's love, the non-sexual kind, but unfortunately it's directional, so there has to be pain.

Leo started taking care of Bee. He even said he would stay as long as he could. But Bee knew that there's no point for him living here for long but Leo was too nice to say goodbye, so she took the necessary action. Nobody knows where she went, or if she's still alive or not. But none of these matters anymore when Leo returns to Honokaa after one year's departure. Being in Bee's house again, Leo finally understands the love that's hidden in those delicious dinners and I can tell that he feels so blessed. Bee once said, "We're all lonely. That's why we crave companionship." This is human nature, at least for most people. Just because we feel lonely easily, we need to treasure those people who make us feel loved and cared. Even when they're gone, that precious feeling in your heart could give you some warmth on a cold lonely night.

They always say, actually, happiness is very simple. I say, it's easy to find but hard to keep. Movie stories make me happy but they are isolated from reality. Once something hard breaks in, the crystal joy you've built could be easily destroyed, but why worry about losing before you've completely owned it? If you want to make happiness simple, when you see it, just say "Aloha!"
3 有用
1 没用
点击展开全文 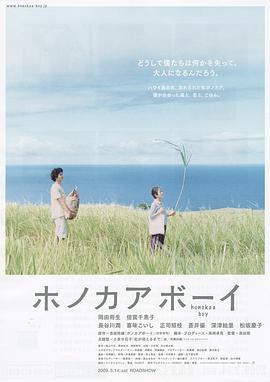