* It's got red buttons and white buttons, it's got knobs, it looks like a computer.

* The reviewer said the maraca sound in particular sound like a hoard of marching ants.

* But the fact that it didn't sound like real drums would end up being the 808's attraction. It sounded like otherwordly futuristic. The low sonic boom of the kick, the tinny snare, cowbell, and odd sounding handclap. These elements all combind to make it complete unique.

* What made the 808 a better tool was that I was able to tweak and tune the toms, and even adding the extra snap on the snare, as well as widening the decay on the kick drum made a difference and the 808 boom was a big thing.

* They really rocked the percussion and the hi-hats, so now you found another element of the 808 that was really interesting, it wasn't all about just the kick and the snare no more, now you had the do do do. And you had all that type of stuff making you dance. That's one thing about the sound of the 808 it had the ultimate dance feel to it.

* People could tune their kick drums, so the kick drum could play the bass at the same time. There was drums and there was bass, but now the two were sort of fused, so the feel was not just complex and rhythmical but it was also tonal.

* It just filled a massive void in the sound spectrum that wasn't there.

* 808 was definitely a serious sound that gave that extra funk and grunt to the record. Because if you heard Kraftwerk they was funky, but they didn't have that soulful bass bottom that was needed.（Planet Rock的主题旋律采样的是Kraftwerk的Tour de France）

* When we heard 'Planet Rock' it was like a great twist on 'Trans-Europe Express' because I loved the theme out of it. It was just like a fantastic new look at it, you know. It was like Kraftwerk go tribal. You would never imagine Kraftwerk doing that, which was the brilliant thing about it. You heard keyboards, you heard bass lines, but what's this drum sound. It's like Krafwerk, but it's urban, it's funky, it's cool. It was new territory because no one had really used an 808 on a record.

* It was like futuristic, but making me dance. It was something that was very techie, when we didn't know that techie was. We just knew it was electrifying.

* Planet Rock was definitely one of those like eureka moments for me.

It is quite a cold way of working, working with electronic instruments. And then every happened when he put the vocal down and it warmed the whole track up and it all made sense. You have these sexual lyrics and this electronic groove and it kind of went, yeah, it works.

It's kind of weird that, one of the biggest hits of his career, the only song that got him(指Marvin Gaye) a Grammy was probably one of the most coldest, frozen, instrumental songs of that period.

Yauch was like, 'Oh, we shoud record it backwards. Because Jimmy Hendrix, I'd heard or read somewhere that he used to do a lot of stuff backwards.'

He'd turn the tape over, record the guitar solo, and then turn it back over and the shit would be backwards. So he programmed just like the simplest 808 pattern, but recorded it on a tape. Then flipped the tape over so it was recording it backwards then played it back so it would.

If it weren't for those records, I don't think the 808 would carry on because of what a great sound it is. In some ways the idea that "it was obsolete eighteen months after" was true, it really was. But because it was used on these great records, and has such a signature sound, it lives on forever.

* The interesting for me would be to be able to see what Roland thinks of what they've created or if they even understand the culture that they created. They created a whole underlying musical movement, you know.

Roland sold 12,000 TR-808s during a limited three year production period. But with Roland no longer able to source the noisy transistor that was key to its sound its life was cut short. Ironically one of the sounds that made it so distinctive led to it being discountinued. Those machines that were built went on to creat musical history, and the 808's heart continues to beat today. 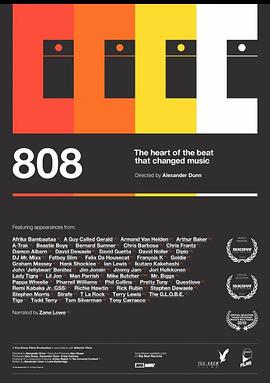