The Ideology of a Town.

But let's move a little bit deeper. Let's think about... well, one of the great achievements of Western Civilization, a movie like The Sound of Music. Officially, as we all know, it's a story about small, anti-fascist, democratic Austrians, - at the political level, that is to say - I will leave out all the singing aspect - small, honest, democratic Austrians, fighting, resisting the Nazi occupation of Austria in. But! Look at the movie really closely. Look at its texture,and you will discover a quite different reality, a kind of a virtual reality of the officially depicted narrative reality. If you look at how Austrians are depicted in the movie, you will discover- to cut a long story short -that they are precisely depicted as a kind of a small-is-beautiful provincial fascists. Their idiocy is emphasized, these local folkloric dresses, etc. They're presented directly as anti-intellectual, rooted in narrowlife world, etc. Now, look at how the occupying, invading Nazists are presented. They're not mostly soldiers, but managers, bureaucrats, exquisitely dressed, with short mustaches, smoking expensive cigarettes, etc. In other words, almost a caricature of cosmopolitan, decadent, corrupted Jew. So, that's my point: at the level of simple narrative reality we get one message, democratic resistance to Nazism. But at the level of - let's call it - virtual texture all these micro signs, maybe we could even call it writing, we get practically the opposite message, which is: "Honest fascists resisting decadent Jewish, cosmopolitan, takeover. "And incidentally maybe this is at least one of the reasons why this movie was so extremely popular. While officially agreeing with our democratic ideology, it, at the same time, addresses our secret fascist dreams. But let's take a more serious example: Robert Altman's masterpiece, Shortcuts. Again, at the narrative level we get a simple story,or rather - stories, parallel stories, depicting desperate everyday life of LA middle classes, It's the portrait of today's alienation, solitude, etc. But again, the very texture of the film, I claim, is a much more optimistic one. It's a kind of celebration of this magic of contingent encounters, generatings, unexpected effects of meaning. So I think that...In a similar way to how we should read The Sound of Music, it is wrong to read Shortcuts simply as kind of social critical piece, there is another much more optimistic, life asserting even, letter. 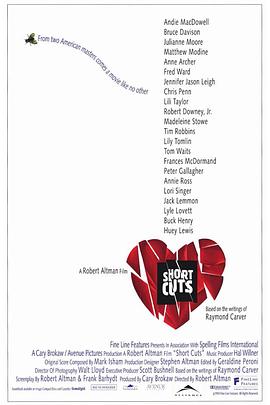