The way visual art should be

To those of us who are not familiar with Bible, this long quotation above is the minimum required reading to understand the imagery of "The Third Part of the Night". Dark and profoundly pessimistic, visually stunning and intellectually challenging, this is THE greatest film I have seen this year.

In this Kafka-esque blend of reality and nightmare, men and women strive for happiness, decency, and dignity, and their strife is mercilessly, and somewhat mysteriously, crushed. As in a nightmare, fatal loss and deep trauma come upon us with no reason, no premonition, and no escape. But for those of us who have witnessed a part of the 20th Century, we know that Reality can be as surreal and as debilitating as a nightmare from which one cannot wake up, that Terror and nightmare have this, among other things in common: there is no behavioral logic or social order, and a total lack of moral cause.

We are invited into this Inferno, and witness every human response to such shocks, and how they attempt to deal with the trauma: indignation, revenge, opportunism, altruism, denial, fleeing, rationalizing, resignation, betrayal, desperate pursuit of a last moment of love and happiness...... a complete inventory is difficult, for we would inevitably have to reduce the great performance by an excellent cast to a limited range of stereotypes, which hardly does justice to the film's complexity and nuances. But what appears certain is that every last hope is dashed. But the even darker (and perhaps more realistically than most movies on a similar subject) and more radical revelation, is that with death comes no redemption and no final meaning, and one's physical annihilation is accompanied by no possibility of nobleness. In other words, it differs from the aesthetics of Greek tragedies in denying Dignity in human Suffering.

Many questions are raised, but no answer provided. The structure of the film is such that we are inundated by wave after wave of despair and horror, and the films finally closes on an agnostic cry of anguish. It is not for you if you need "closure" from a movie. Honest, profound and hauntingly beautiful, "The Third Part of the Night" achieves the rare--- but perhaps appropriate to visual art ---viewer response, of deep appreciation and lasting fascination in absence of full comprehension. The lingering mystery guarantees a resounding echo in the viewer's mind. Marvelous.
8 有用
6 没用
点击展开全文 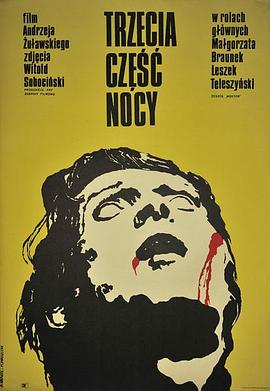