One of My Favourite Movie

云梦泽
2006-04-21 看过
I’ve watched hundreds of different films, with various styles, assorted actors and actresses and different stories in the background of all periods of time. The one I like best is “Meet Joe Black”. This three-hour long film, which has fascinating stories and charming actor—Brad Pitt, has given me so much to think about myself and life.
In the film, Brad plays the role of Death and Anthony Hopkins as an old man with wealth and power named Bill. Days before the old man’s 65th birthday, he received a visit from a mysterious stranger—Joe Black, upon whom the Death happened to attach. In exchange for extra time, Bill agreed to serve as Joe’s earthly guide, unfortunately, Joe unexpectedly fell in love with Bill’s beautiful daughter Susan. The situation Joe was facing with was his duty and the emotion deep from his heart. On one side, he had to give the old man a happy ending and avoid him from knowing that his daughter had fallen in love with a demon; on the other side, he had to protected the girl from knowing his identity and the fact that he was the one who would bring off her father’s life, what’s more, to restrain the increasing affection to her. At last, the old man Bill died peacefully, but Death himself found it anguished to extremity to depart from the woman he loved. The emotionless Death tasted pain and tears in the world of mortal.
Brad Pitt, who acted as Death in this film, has a talent of showing all kinds of complex emotions. This “voted-sexiest man” seems expert in acting figures with complicated characters, which can be figured out from “The Fight Club”, “Legend of the Fall” and so on. The handsome appearance is just one reason why I like him so much. The more important one is the gleam of his eyes. Death was revealed thoroughly by Pitt’s eyes, sometimes lovable, sometimes desperate, but always deep and reserved. I suppose that is why the girl in the film fell in love with him at the first sight, without any hesitation.
I’ve only watched “Meet Joe Black” for twice, however, it became my favourite film since the first time I watched it. I was deeply attached by this deliberate way of expressing feelings, then leading us to think of what the life means to us. Feeling no pain doesn’t mean a perfect life, even Death can not resist the power of love, the temptation of true emotions, let alone we ordinary people. So, just to experience is a fortune.
For the second time of watching, I didn’t even wait till the very end. The moving scene had already touched the deepest place in my heart, and became the truest sensation ever since.
37 有用
3 没用
点击展开全文 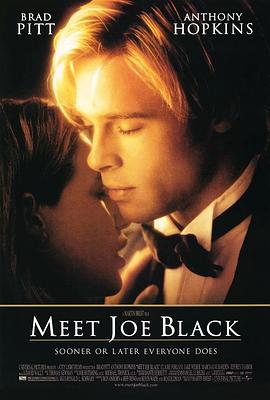