Jean
2005-12-10 看过
Devils on the Doorstep is set in a small dusty Northern China village during Japanese occupation, at the end of WWII. The director is Jiang Wen, who is banned from directing any movies for seven years (till 2007) by the Chinese government, because he took this film to Cannes voluntarily without obtaining the “proper” blessing from the authority. Regardless, it won Grand Jury Prize from Cannes in 2000.

Both M and V have seen it and both of them have urged me to see it, and told me it was dark but also humorous. Then again, it was not really dark humor. At the end of August, I finally saw it at M’s place. When the final credit started rolling, I was still emotionally trapped in the ending’s “dark humor”, M remarked sullenly, “The tragedy of China.”

That sentence pulled me out of the contemplating mood right away, “Why China?” I was puzzled. “If it is anyone’s tragedy, it is the tragedy of human race. It is good versus evil, and the innocence versus the ’sophisticated’ calculating mind. It is not just China versus Japan. It is universal. And that is what made this movie such a masterpiece. Or it could be struggle between the bright and the dark sides within each and every one of us… but China?”

What it really reminded me of, actually, was a story I’ve read in Magus, where an old man recalling his dark secret during WWII, when he was the head of a village in southern Europe, under occupation of the Nazis. One day, some Nazis came to their village and they gave him, the head of the village, a choice. He could pick one of his fellow villagers and shot him or her himself, or the Nazis will shoot the entire village including him. He was hunted by that choice and his ultimate decision ever since.

Then there was the story of Sophie’s Choice.

And a line I remembered from the movie The Green Mile, “Devil uses the goodness in you to kill…”

Evil certainly didn’t seem to be partial to China. But M had a point, too. It was the national character of China as a country to make Japanese occupation possible. Their satiable nature and middle-road philosophy taught over the thousands of years, made the mass of China not a very ambitious or aggressive bunch, while their tiny neighbor on an island always has a much grander scheme in mind.

Still, I wanted to argue, whatever the Chinese did in the movie represented their goodness, while whatever the Japanese did was evil and criminal-court-worthy.

“So? Who is dead at the end?” M won’t budge.
“I know it was not fair. But would you feel better or worse if the characters traded places in the movie? Would you prefer the Chinese characters to be evil? Won’t that be even more a tragedy for China?!”

I knew I had a rhetoric advantage. M’s frustration alarmed me still. So I thought of this topic some more. If there was any one character in the movie that I found especially hateful, it had to be the Mr. Gao （高某人） at the end. The one that was put in charge of the city after Japanese surrendered. He represented all that was bad about Chinese society, hypocritical, self-congratulatory, contemptuous toward the poor and the less educated, and was always on a power-trip. I was just going to say if the movie really showed a Chinese tragedy, then this Gao Mou-ren was it. But I suddenly remembered Robert Kaplan. He mentioned a class of people he met during his travel in Middle East, from Egypt to Turkey to Iran. He called them the “most dangerous” educated class. They were educated in the west, but they were dismissive toward human rights. They respect power and money above all else.

So, you see? Even the Gao Mou-ren was not unique to China.

What’s even more ironic was the entire episode happened AFTER the movie was made: the fact that Jiang Wen was black-listed and wasn’t allowed to direct any movie till 2007. Isn’t that absurd? Apparently the successor of Gao Mou-ren is still in power. That, my friend, is truly a tragedy of China.

Devils on His Doorstep

In Cannes, Jiang Wen’s new film got a top prize, but in China it may get him seven years on the blacklist
By RICHARD CORLISS

His name sounds like “John Wayne,” and Jiang Wen has a solid star bearing to go with the cowboy stubbornness. Mainland China’s most famous actor (Red Sorghum, Black Snow) and most vigorous director (In the Heat of the Sun), Jiang delivers his sharp opinions with an implacable stare that could turn the nastiest gunslinger into cornmeal. But now he is up against a marauding posse of film bureaucrats. The showdown may get bloody.

Devils on the Doorstep is Jiang’s scalding tragicomedy set in a Chinese village during the wartime occupation by the Japanese. One villager, Ma Dasan (played by Jiang), is told to hold a Japanese officer and his Chinese translator as hostages. The film, which traces the villagers’ fear and the soldiers’ brutality, won the Grand Prix (second place) at this May’s Cannes festival’a high honor, and a victory for Chinese cinema.

The censors at the Film Bureau didn’t see it that way. They were furious that Jiang had entered the film in the festival without their permission, after receiving their detailed critique of the script and the finished work. They sent two officials to Cannes to try to dissuade the festival from screening Devils and demanded that Jiang hand over the negative (which was not in China). Now, according to reports from Asian film circles, the authorities plan to punish Jiang’s film, and his defense of it, by forbidding him to work in China for seven years.

Jiang says he has not been handed such a document. (”So far,” a Bureau spokesman says, “no formal decision concerning his case has been made.”) Nor have they answered his pleas to discuss the matter. “I’ve asked seven times for a meeting with Film Bureau officials,” he declares, “but with no success.” The censors seem to resemble the villagers in Devils, reluctant to speak, or face, the truth. “The film shows that people must express their feelings frankly and openly, instead of bottling them up inside while smiling and nodding. This is a fault of most Orientals. If we wish to have genuine peace, we must speak openly.”

There’s no use pretending that Devils is a sweet puppy of a movie crushed under the wheels of the censors’ tank. The film is both outraged and amused at the carnage (several brutal deaths of the innocent and weak) the soldiers wreak on civilians; it has a God’s-eye view, a kind of humanist misanthropy, of the disasters of war.

Yet the Film Bureau’s view is rustic in its naivete. “The language used in the film is offensive in many places,” the report notes. (A frequent epithet is “turtle-f—er.”) “There is also a shot of a nude woman. In general, the style of the film is vulgar.” It also says Devils is too nice to the Japanese and too critical of the Chinese. “The evaluation basically accuses Jiang of intentionally vilifying the Chinese and beautifying the Japanese invaders, of being a neo-fascist and national traitor,” says a Chinese producer. “That’s a very serious accusation.” It is a mirror of charges from Japan’s ultra-right groups, which see the film as a slur on its military. These groups are reportedly trying to keep Devils from being shown in Japan and threatening to harm the Japanese actors who appeared in it.

The Film Bureau in Beijing is slated to be dismantled as the state bureaucracy is streamlined; some film people believe that, by stoking this controversy, the censors are trying to make themselves appear indispensible. “It seems I am caught in a political power play,” Jiang says. The officials are also telling producers of a new project not to hire Jiang as a star. “They may not have the guts to tell him, ‘You’re banned,’” says an industry observer. “But they could put him on an implicit blacklist.”

Jiang is not the only prominent filmmaker to be corraled by the censors. Chen Kaige and Zhang Yimou have seen many of their films cut severely or banned from theatrical showings. Tian Zhuangzhuang was denounced so fulsomely in 1993 for his poignant drama The Blue Kite that he has not been able to make a film since. But Jiang is the auteur most likely to shout out his grievances. He will not be the next Chinese filmmaker to bite the dust. He’s more likely to spit the dirt in his accusers’ faces.

“I feel like Ma Dasan,” Jiang says wryly. “The film has become real life. But I hope I won’t have as tragic an ending as his.” That would be a shame, for when the Kuomintang take over the village at the end of the war, they make an example of Ma and cut his head off. That never happened to Duke Wayne. 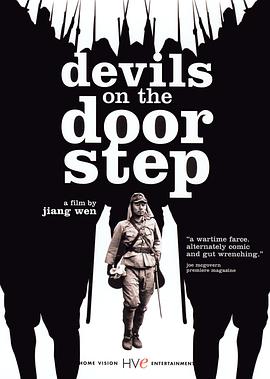