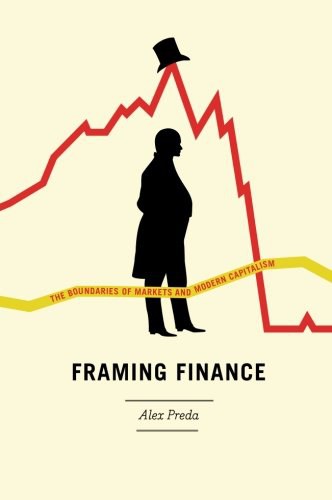 As the banking crisis and its effects on the world economy have made plain, the stock market is of colossal importance to our livelihoods. In "Framing Finance", Alex Preda looks at the history of the market to figure out how we arrived at a point where investing is not only commonplace, but critical, as market fluctuations threaten our plans to send our children to college or retire comfortably. As Preda discovers through extensive research, the public was once much more skeptical. For investing to become accepted, a deep-seated prejudice against speculation had to be overcome, and Preda reveals that over the course of the eighteenth and nineteenth centuries groups associated with stock exchanges in New York, London, and Paris managed to redefine finance as a scientific pursuit grounded in observational technology. But Preda also notes that as the financial data in which they trafficked became ever more difficult to understand, charismatic speculators emerged whose manipulations of the market undermined the benefits of widespread investment. And so, "Framing Finance" ends with an eye on the future, proposing a system of public financial education to counter the irrational elements that still animate the appeal of finance.