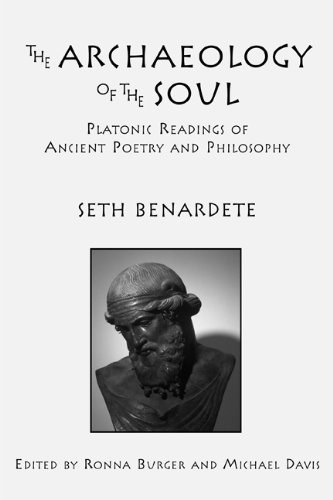 The Archaeology of the Soul is a testimony to the extraordinary scope of Seth Benardete’s thought. Some essays concern particular authors or texts; others range more broadly and are thematic. Some deal explicitly with philosophy; others deal with epic, lyric, and tragic poetry. Some of these authors are Greek, some Roman, and still others are contemporaries writing about antiquity. All of these essays, however, are informed by an underlying vision, which is a reflection of Benardete’s life-long engagement with one thinker in particular – Plato. The Platonic dialogue presented Benardete with the most vivid case of that periagoge, or turn-around, that he found to be the sign of all philosophic thinking and that is the signature as well of his own interpretations not only of Plato but also of other thinkers.
The core of The Archaeology of the Soul consists of a set of essays Benardete produced in his last years; the collection provides at the same time an entry into that world through some of Benardete’s earliest articles on Plato and on Greek poetry. Benardete’s earlier path of close textual analysis always reflected his intimate philosophic dialogue with the thinker in whose work he was immersed; later, he drew on resources of erudition acquired over a lifetime to present a broader picture, on a theme like the dialectics of eros or freedom and necessity.
In his late work Benardete was not only engaged in putting together in more general form material he had worked out earlier; he was still on the trail of new discoveries, above all, by extending his Platonic understanding of philosophy to pre- and post-Platonic thinkers. He had become increasingly aware that the discovery of philosophy through the “Socratic turn” was really the rediscovery of an understanding already present in some form in the Greek poets and that awareness guided his last years of study of the pre-Socratic philosophers. According to the standard view of the history of Greek philosophy, the Socratic turn, with its focus on “the human things,” marks a point of radical change in philosophy’s history. Benardete’s late studies led him to the conclusion that the kind of pivotal reorientation thought to be Socratic is in fact the mark of what it means to think philosophically, and Heraclitus or Parmenides is a genuine philosophic thinker precisely to the extent that a Socratic turn can be found in some form within his own thought.
At the same time that he was pursuing a track backward, from Plato to the poets and pre-Socratic philosophers, Benardete was also proceeding on a forward path, from Plato to the Latin writers, who adopt the Platonic way of thinking with full understanding of what it means to be “post-Platonic.” As the essays collected in this volume demonstrate, the Platonic notion of a “second sailing” gave Benardete a key to the relation between Greek and Latin thought – and with that to a comprehensive understanding of antiquity – as it did to the relation between poetry and philosophy as such.