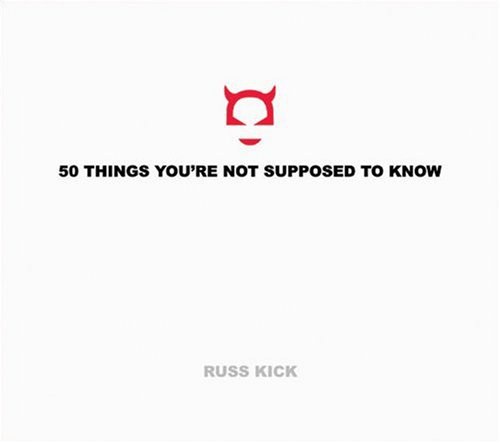 Russ Kick has proved himself a master at uncovering facts that "they" would prefer you never hear about. The rapid success of the large-format "Disinformation Guide" series edited by Kick has only whetted a roaring public appetite for more revelations about government cover-ups, scientific scams, corporate crimes, medical malfeasance, historical whitewashes, media manipulation, and other knock-your-socks-off secrets and lies.This CD-sized book packs a powerful punch in a small, attractive package intended for impulse and gift purchases, as well as serving as a handy reference book. Among Kick's amazing discoveries, all thoroughly documented: The first genetically modified humans have already been born.Hitler's blood relatives are living in the U.S. The CIA commits over 100,000 serious crimes per year. The U.S. planned to explode an atomic bomb on the moon. An atomic bomb was dropped on North Carolina. The main hero of the movie Black Hawk Down is a convicted child molester. The discoverer of HIV no longer believes the virus is the sole cause of AIDS. Kent State wasn't the only massacre of U.S. college students during the Vietnam era. Lincoln didn't free any slaves. A uniquely valuable tool to debunk modern mythology and the people and institutions serving it up, " 50 Things You're Not Supposed To Know" is an amazing value carefully timed for holiday purchase, and will be supported by a large co-op and retail sales aid spend.