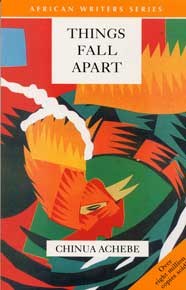 Okonowo is the greatest warrior alive. His fame has spread like a bushfire in West Africa and he is one of the most powerful men of his clan. But he also has a fiery temper. Determined not to be like his father, he refuses to show weakness to anyone - even if the only way he can master his feelings is with his fists. When outsiders threaten the traditions of his clan, Okonowo takes violent action. Will the great man's dangerous pride eventually destroy him?