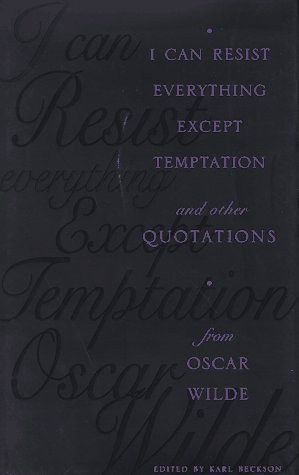 "I love scandals about other people, but scandals about myself don't interest me. They have not got the charm of novelty", one of Oscar Wilde's characters says. Another remarks, "I never travel without my diary. One should always have something sensational to read in the train". Before Wilde himself was brought down in one of the most sensational scandals of his time, he was sought after for his flamboyant personality, his scintillating conversation and his sophisticated wit. "I Can Resist Everything Except Temptation" captures the best of those witicisms at which Oscar Wilde excelled. Naturally aphoristic, his remarks are among some of the most familiar in the English language, encompassing a wide range of subjects and people; there is hardly a topic for which he didn't have a witty comment, from pleasure ("Pleasure is what we take from others, duty what we expect from others, and genius what we deny to others") to dying ("I an dying, as I have lived, beyond my means"), from fiction ("Anyone can write a three-volumed novel. It merely requires a complete ignorance of both life and literature") to sentimentality ("One must have a heart of stone to read the death of Little Nell without laughing"). This book also contains selections from personal letters - letters filled with poignant remarks on his life and on the human condition. Karl Beckson has selected more than 1,000 quotations on subjects from absinthe to Zola. With its comprehensive citation of source material, "I Can Resist Everything Except Temptation" is not only a boon to writers, but a lovingly crafted portrait of one of history's most quotable figures.