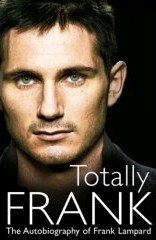 Chelsea and England footballer, Frank Lampard charts his life story from childhood to young West Ham apprentice to multi-millionaire world footballing celebrity and lynchpin of the national team. This work includes a full account of the 2005/06 season and the 2006 World Cup Finals in Germany. One of the best footballers in Britain today, and the 2005 Footballer of the Year, Lampard has been lauded by fans, managers and fellow players alike. A vital cog in the midfield engine room for Chelsea and England, he is poised to become one of the true legends of the game. The young lad from Romford was born into a football family. His father, a former West Ham star, saw the raw talent in his boy at an early age and was unstinting in his determination for him to succeed. The hard work paid off and Frank Jr kept it in the family by signing to West Ham in 1995, then managed by his uncle Harry Redknapp. Since transferring to Chelsea in a blaze of controversy, he silenced any critics and proved himself indispensable to his club. No-one in his age has played more Premiership football than Lampard, and no-one played more at Chelsea - in fact, he has broken the record for number of consecutive appearances for the Blues. He also holds the record for most goals scored in a season by a Premiership midfielder. In his book, Lampard opens up on his early years, how he dealt with the fame and fortune that has come his way since becoming a key member of the England side, his frank opinions on former England boss Sven-Goran Eriksson and his manager at Chelsea Jose Mourinho, fascinating insights into Roman Abramovich and revealing tales on his current team-mates. He reveals both the privileges and the pressures of being one of the 'golden generation' of England players. He gives a fascinating inside account of World Cup 2006 in Germany, and describes the disappointment of not fulfilling the dream of bringing the biggest prize in football back to England.