legalkiwi
2014-03-12 看过
A friend of mine recently experienced an unsuccessful love affair. She is painful, resentful, sad, upset. After the person she loves refuses to answer her phone calls, she explodes. She calls me up almost every day - in the morning, during my work, at bed time and pours her negativities all to me.

It's not an uncommon scene. When the contact with the man you "love" is cut off, you always feel cut off from the whole world. Then, what you do is trying crazily (which means, with mad efforts) to get it reconnected, in whatsoever form.

We are no longer living in a world of war, famine and poverty, so we are not struggling for a physical living. We do not have a concrete enemy to fight with so we start to fight ourselves. Psychologically we do not better off that much from the material success we've accumulated through generations. Testification is simply an unrequired love can beat us so hard and degenerate a highly educated, intelligent person into a pollute-around negativity engine.

That's why I would say, we need this book.

Don't read its Chinese version. Read the English text. Don't try to think about its logic and reason. Don't judge. Just read. Let the words flow through you as if you are transparent. Read it like you're doing mental exercises.

I read it 2 years ago and rated it 4 stars. When hearing my friend's long time calls I read it again and added another star to its credit.

When I was sitting for my bar exam I read a textbook recommending doing meditation while preparing for the exam. I felt it's childish. Years later when I've been through a lot of spiritual crisises, I began to acknowledge its working mechanism.

NOW. NOW is a powerful thing, a strong mental practice method and it works. You can't function in past or future (well we're all customarily expecting so), and you can't live for past or future. All you have is NOW.

The author is not a somewhat trickster making up words to delude you (at least not what it reads like through the Chinese version). He has been well educated, spiritually experienced and trained. This book is as well not high-end metaphysics hard to comprehend. The arrangement of words has within it a power to lead you to that portal open for inner peace. If you learn to read without your mind and ego, you will notice its function. On the contrary, if you read through thinking, you would probably find it meaningless and nonsensical, which will be a huge pity and waste.

I still remember in Kongfu Panda 2 Bao's teacher murmured "inner peace" to himself several times but always failed to be peaced. Well, I hope he can read this book, sometime.

Remember: read it without thinking/judging. I'll see you on the other side.
1 有用
0 没用
点击展开全文 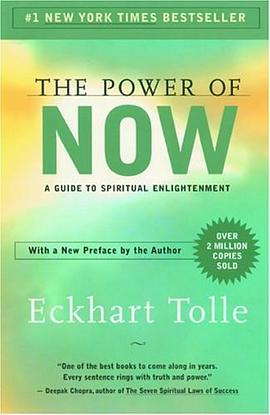