A View of The Open Sky

Vi
2012-05-30 看过
She is not just a well-known modernist writer, who is famous for her unreachable “stream of consciousness” words, but also a creative and sharp critic on man-dominant literature, sexual prejudice and social exclusion that woman suffered from. She is Virginia Woolf, a woman writer who is considered as “the alpha and omega of feminist criticism, its origin and its ‘goal’” (Laura Marcus, 2000), Virginia Woolf’s critical and creative theory of feminism has been a center of controversy, both literary and non-literary from her time to ours. Most of her literary theories are perfectly practiced in her novels and biographies; they are also explicitly demonstrated in her essays. The most famous and influential one is A Room of One’s Own (1829), which is widely recognized as “the first modern test of feminist criticism, the model in both theory and practice of a specific socialist feminist criticism”. (Jane Marcus, 1984) She devoted herself to analyzing and promoting woman’s writing and tried to find the diverse and deep-rooted reasons for the absence of female writers in literature history; further, she did not leave the problem unsolved, but found a “Woolf’s way” – “kill the angle in the house” to let the women who “has Shakespeare’s genius” (Virginia Woolf, 1928) to write, to exude the electric that they can and amaze the world.

Virginia’s literary advocacy of the aesthetic of androgyny is another aspect that she left the literature world as a controversial theory. The defined androgynous mind is a state of mind that is a “moment of being”, with the masculinity and femininity cooperate together as “a natural fusion”. Her androgyny theory is widely practiced in many of her experimental works, which shows that, the perfect mind of state is with both of the features to reach the balance of body and mind.

From what we can find through English literature history, especially in Britain, the voice of women was seldom heard until the time of Geoffrey Chaucer, when those women were not “writers” but “religious ”, who wrote not poems nor novels but their inner spiritual experience with God. It also suggests that by that time the women who lived a “normal” life had no voice being heard at all. (Guo, 2003) In the 17th century, Aphra Behn, the first woman writer who took writing as profession, started the history of women’s professional writing.

It is the economic and politic changes in society that directly affect the development of women’s writing. Along with the more education for women and the increasing social property, women were given relatively more opportunity to reach their self-value through different ways. In 1928, women were given the equal right to vote as men. What came along with the possession of political right was the prosperity of women’s writing.

What Woolf saw from the history of women’s literature is not only material, but spiritual; not so visible, rather invisible. It is the sexual prejudice and the tyranny of patriarchy that she saw: “the most transient visitor to this planet, I thought, who picked up this paper could not fail to be aware, even from this scattered testimony, that England is under the rule of a patriarchy.” (Virginia Woolf, 1928) In A Room of One’s Own, she makes the famous line that suggests the women with “thought” calling for breaking free from the traditional “household” social character, and the tyranny of patriarchal society: “[…] a woman must have money and a room of her won if she is to write fiction”. The obstacles that the women are facing are not just material but also spiritual.
1 有用
0 没用
点击展开全文 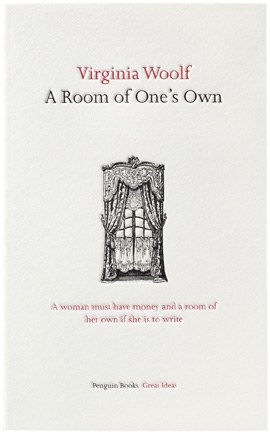 A Room of One's Own的更多书评