In the relating of small tales and glimpses of life

Alcor
2009-09-19 看过
Who but Dame Edith Sitwell could produce such a wonderful send-up of the British, poking fun by speaking the truth as she saw it, in The English Eccentrics. Eccentricity was often simply the Ordinary carried to a high degree of pictorial perfection, Sitwell claims, and thus we get a gifted glimpse of the usually-overlooked obvious.

Of course, there is so much material to work with, it is a wonder the book isn't multi-volumed! Originally published in 1933, it retains much of its vitality and levity despite being two generations (at least) behind the times. Sitwell caught the character of the English Eccentric at a time just before the wholesale decline of Empire, and thus the character portrayed here is a 'standard' one.

In the relating of small tales and glimpses of life, Sitwell takes us through a history of language usage and abusage, cultural niceties gone awry, personal proclivities taken to extremes, historical remembrances remembered a bit incorrectly, all the while maintaining a strong British 'we know just what we're doing, thank you, and we're doing it quite correctly' attitude.

We find hermits, both ancient and ornamental (the distinction between the two of course being a relative flash that one would think inimical to the hermit-age); quacks and alchemists, some members of the sporting set (we learn of one who, in an attempt to scare the hiccups out of himself, set fire to his nightshirt--of course he was still in it--and was satisfied despite the burns that his hiccups had been vanquished), various other sorts and sets in the land.

Perhaps the most valuable lesson to be learned from this book would the Of the Benefits of Posthumous Fame. Using Milton as the first example, Sitwell proceeds to demonstrate just how this posthumous fame (for the man who sold Paradise Lost for the meagre sum of £20) can be a great boon to all concerned, particularly those who have the foresight to collect locks of hair or write poetry about rummaging through the bone-remains of the dead poet. Of course, there followed in short order a detailed (yet anonymous) description of why the poet could not have actually handled the bones of the poet, not least of which being that as the grave said 1653, and Milton was not in fact buried until 1674, et cetera; thus begins an active correspondence of attempting to prove or disprove in fashion why Milton was not bodily handled.

This is a thoroughly English treatment; like her eccentrics, Sitwell's style of writing is likewise gloriously eccentric. Much will be missed on the first reading, and again the second; by the third reading (should you be so eccentric as to persevere through to such) you will either be so charmed by the writing that you will carry this book around, quoting passages that need context to be understood (and thus be ordained into a minor order of eccentricity yourself) or, you will give the book away to the most tedious of your friends, hoping that the friend will take the hint. 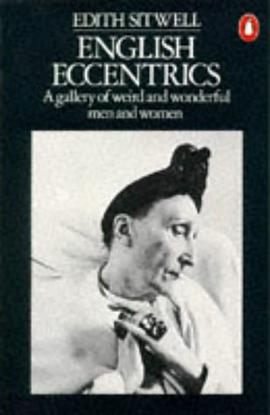