When Help Does Harm
By MATTHEW REES

It is one of the great conundrums of the modern age: More than 300 million people living across the continent of Africa are still mired in poverty after decades of effort -- by the World Bank, foreign governments and charitable organizations -- to lift them out if it. While a few African countries have achieved notable rates of economic growth in recent years, per-capita income in Africa as a whole has inched up only slightly since 1960. In that year, the region's gross domestic product was about equal to that of East Asia. By 2005, East Asia's GDP was five times higher. The total aid package to Africa, over the past 50 years, exceeds $1 trillion. There is far too little to show for it.

Dambisa Moyo, a native of Zambia and a former World Bank consultant, believes that it is time to end the charade -- to stop proceeding as if foreign aid does the good that it is supposed to do. The problem, she says in "Dead Aid," is not that foreign money is poorly spent (though much of it is) or that development programs are badly managed (though many of them are). No, the problem is more fundamental: Aid, she writes, is "no longer part of the potential solution, it's part of the problem -- in fact, aid is the problem."

In a tightly argued brief, Ms. Moyo spells out how attempts to help Africa actually hurt it. The aid money pouring into Africa, she says, underwrites brutal and corrupt regimes; it stifles investment; and it leads to higher rates of poverty -- all of which, in turn, creates a demand for yet more aid. Africa, Ms. Moyo notes, seems hopelessly trapped in this spiral, and she wants to see it break free. Over the past 30 years, she says, the most aid-dependent countries in Africa have experienced economic contraction averaging 0.2% a year.

America's policy toward postwar Europe is often cited as the model for African assistance, but Ms. Moyo reminds us that the vaunted Marshall Plan was limited to five years and was focused on reconstructing societies ravaged by war. In Africa, she says, the aid spigot never stops flowing. "There is no incentive for long-term financial planning," she observes, "no reason to seek alternatives to fund development, when all you have to do is sit back and bank the cheques."

Inevitably, "Dead Aid" will offend the pieties of the World Bank and the foreign-aid sectors of the U.S. government. But Ms. Moyo is not alone in asking tough questions about good intentions gone awry. Rwanda's president, Paul Kagame, has said of the $300 billion in aid given to Africa since the 1970s that "there is little to show for it in terms of economic growth and human development." Senegal's president, Abdoulaye Wade, has expressed similar sentiments.

Given that aid has been, in Ms. Moyo's words, "an unmitigated political, economic, and humanitarian disaster," why has it continued? One reason, she says, is that there about 500,000 people "in the business of aid," and their livelihoods are dictated more by the size of their lending portfolios than the effectiveness of their programs. There is also the Bono effect. Along with other celebrities, the U2 frontman has become a powerful voice calling for still more aid to Africa, not less. The result is a kind of moral bullying. "Honest, critical, and serious dialogue and debate on the merits and demerits of aid," Ms. Moyo writes, "have atrophied."

Much of "Dead Aid" outlines an agenda for Africa's economic development, such as expanding its trade and developing its banking sector -- that is, creating a reliable system of credit that will allow individuals to earn interest on their savings and businesses to receive the loans they need to grow. Ms. Moyo argues for African countries to create bond markets -- a reminder that her instincts are closer to Goldman Sachs (where she worked for eight years) than to Jeffrey Sachs (the Columbia professor who wants Western governments to pour more money into Africa). She notes that, in the past 10 years, 43 developing nations have issued international bonds but that only three -- South Africa, Ghana and Gabon -- were from Africa.

While criticizing outsiders for their misguided ideas, Ms. Moyo does not ignore Africa's self-inflicted wounds. There are, she notes, steep obstacles to doing business there. According to the World Bank, nine of the world's 10 most hostile business environments are in Africa.

Unlike many experts in international affairs, Ms. Moyo does not believe that democracy is a key to solving Africa's problems. What poor countries need, she writes, is a "decisive benevolent dictator to push through the reforms required to get the economy moving." Economic growth, she says, is a prerequisite for democracy. She cites a study showing that democratic governments survive longer as per-capita income increases.

It is too bad that Ms. Moyo did not stop now and then to draw directly on her personal experience -- not only on her work as an investment banker but on her early life in Zambia. (Her mother is chairman of a Zambian bank; her father runs an anticorruption organization.) First-person accounts might have made her argument even more vivid.

Even so, it is vivid enough. She closes her book with a fascinating question: What would happen if African countries were told that in five years all financial aid would end? She doesn't try to answer the question in any detail, other than to dismiss the notion that living conditions in Africa would grow worse. She points to Botswana and South Africa as examples of countries that have prospered precisely because they haven't allowed themselves to become heavily dependent on aid.

Some of us remember Live Aid, the music festival held in 1985 to provide relief to Ethiopia. It was a noble effort and perhaps did some good, but "Dead Aid" reminds us that noble efforts are not enough -- that "help" can often do harm.

Mr. Rees is the founder of Geonomica, a consulting firm, and a former speechwriter at the Securities and Exchange Commission.
4 有用
1 没用
点击展开全文 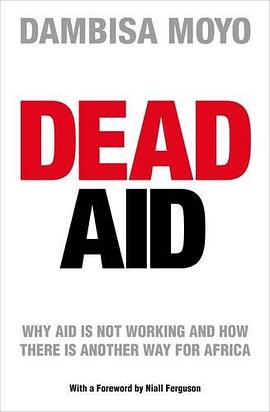