How to explain the spirit of United States?

玄客啸士
2008-01-07 18:39:56 看过
Whether the speech has a spirit is controversial. Generally speaking, a lecturer hold an idea in a meeting would benefits the audiences, the politics and the army leaders. It is hard to conclude a spirit of several speeches has the common topic, yet, this book, "American Famous Speeches" offer us a totally different but significant way to recognize a special spirit, the American spirit--Freedom, liberty and equality.

Usually, in the view-point of Western, the American has a powerful even horrible competent, to persuade lots of people to trust the United States is the core of our earth. Although it is unbelievable, no one can deny the influence of the American speeches. As a sanctimonious man as I am, if instead of having been to United States, I would defend the enchantment of American spirit consciously. Actually, everyone, whether have been to or not, the spirit of United States has a profound and rapid influences on our brave, heart, and generations.

As the matter as fact, if United States did not have a common and uniform ambition or spirit system (even moral system), there would not exist in a strong and massive country in the world, and there would not exist a nature, a new nature, built on a uniform will. I am so fond of an article spoke by Oliver Holmes, his famous motto is “the law is not logic but experience.” From my perspective, so did America! This nature was composed of the independent states and dependent spirit. And then, we could convince that the why The American can insist the spirit of freedom without any needless anxiety about dissociation.

Okay, let's return to theme, this book. I supposed that no one would like bombast, especially the dirty pool supported by some politics, such as the Richard Nixon's "The Watergate Affair". I totally dislike the politician, and am tired of the empty rhetoric, even included an innocent assert (for instance, Jimmy Carter's "Normalizing Diplomatic Relation with China"). This book would arranged these articles better, to increase the opposability, to raise the spirit from the bottom of the speech, these selections I suggest would make this topic more clearly and respectively.

It seems to me that not only was the freedoms they believed, but the others spirit, they belongs to American--the citizens of United States, not we--the people of China. If one guy might assert that the American freedom would have a universal meaning, and would rescue the whole world. I would answer--you are such a bitch! OKAY, don’t talk smut... I recommend you wholeheartedly to read this book, you would know, the spirit of United Stated, came from the war, the contradiction, the contention, the collision and the tireless efforts of several heroes in this country.

This is a good book. (Though the translators are intermingled of the good and bad)
2 有用
0 没用
点击展开全文 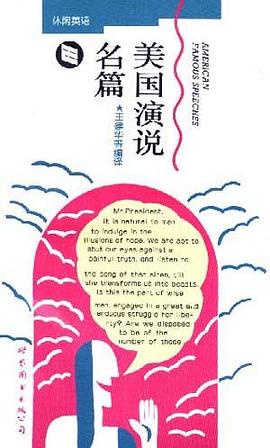