enriching your own life

When reading Maugham’s The Razor’s Edge, I had this intuition:

“Maugham takes care to give each character opportunities to express their nuanced thoughts, patient enough to let them navigate through their own individual lives, unobstructed towards their goals. More of an impartial observer, Maugham would watch meticulously how the actions of his characters ripple out to brush against one another, however, when he writes, he is relentless, and nothing escapes him, not the tiniest subtly of the most obscured intentions of his characters.”

Stephen King confirmed what I could only have guessed from a reader’s perspective. His basic belief about the making of stories is that “they pretty much make themselves” and “the job of the writer is to give them a place to grow.” He said, “I often have an idea of what the outcome may be, but I have never demanded of a set of characters that they do things my way. On the contrary, I want them to do things their way. In some instances, the outcome is what I visualized. In most, however, it’s something I never expected”.

This book on writing taught me more about fiction than a lot of literary criticism essays of artificial profundity ever did. I tried to recapitulate what I had learned, but nothing I wrote was remotely as good as the original. What is in the original is a best-cut jewel 💎 from the most skilled jeweler. Any alteration would simply break it. Why don’t I present you with this jewel in its most intact and refined form as I found it?

1 The word is only a representation of the meaning; even at its best, writing almost always falls short of full meaning. Given that, why in God’s name would you want to make things worse by choosing a word which is only cousin to the one you really wanted to use?

3 Constant reading will pull you into a place (a mind-set, if you like the phrase) where you can write eagerly and without self-consciousness. It also offers you a constantly growing knowledge of what has been done and what hasn’t, what is trite and what is fresh, what works and what just lies there dying (or dead) on the page. The more you read, the less apt you are to make a fool of yourself with your pen or word processor.

4 Your job is to make sure the muse knows where you’re going to be every day from nine ’til noon or seven ’til three. If he does know, I assure you that sooner or later he’ll start showing up, chomping his cigar and making his magic.

5 Now comes the big question: What are you going to write about? And the equally big answer: Anything you damn well want. Anything at all … as long as you tell the truth.

6 I distrust plot for two reasons: first, because our lives are largely plotless, even when you add in all our reasonable precautions and careful planning; and second, because I believe plotting and the spontaneity of real creation aren’t compatible. It’s best that I be as clear about this as I can—I want you to understand that my basic belief about the making of stories is that they pretty much make themselves. The job of the writer is to give them a place to grow (and to transcribe them, of course). If you can see things this way (or at least try to), we can work together comfortably.

... Plot is, I think, the good writer’s last resort and the dullard’s first choice. The story which results from it is apt to feel artificial and labored.

7 The situation comes first. The characters—always flat and unfeatured, to begin with—come next. Once these things are fixed in my mind, I begin to narrate. I often have an idea of what the outcome may be, but I have never demanded of a set of characters that they do things my way. On the contrary, I want them to do things their way. In some instances, the outcome is what I visualized. In most, however, it’s something I never expected.

8 Good description is a learned skill, one of the prime reasons why you cannot succeed unless you read a lot and write a lot.

Description begins with visualization of what it is you want the reader to experience. It ends with your translating what you see in your mind into words on the page.

Description begins in the writer’s imagination, but should finish in the reader’s.

9 Before beginning to write, I’ll take a moment to call up an image of the place, drawing from my memory and filling my mind’s eye, an eye whose vision grows sharper the more it is used. I call it a mental eye because that’s the phrase with which we’re all familiar, but what I actually want to do is open all my senses. This memory search will be brief but intense, a kind of hypnotic recall. And, as with actual hypnosis, you’ll find it easier to accomplish the more you attempt it.

The key to good description begins with clear seeing and ends with clear writing, the kind of writing that employs fresh images and simple vocabulary.

10 Skills in description, dialogue, and character development all boil down to seeing or hearing clearly and then transcribing what you see or hear with equal clarity (and without using a lot of tiresome, unnecessary adverbs).

11 Symbolism (and the other adornments, too) does serve a useful purpose, though—it’s more than just chrome on the grille. It can serve as a focusing device for both you and your reader, helping to create a more unified and pleasing work. I think that, when you read your manuscript over (and when you talk it over), you’ll see if symbolism, or the potential for it, exists. If it doesn’t, leave well enough alone. If it does, however—if it’s clearly a part of the fossil you’re working to unearth—go for it. Enhance it. You’re a monkey if you don’t.

13 Writing isn’t about making money, getting famous, getting dates, getting laid, or making friends. In the end, it’s about enriching the lives of those who will read your work, and enriching your own life, as well. It’s about getting up, getting well, and getting over. Getting happy, okay? Getting happy. Some of this book—perhaps too much—has been about how I learned to do it. Much of it has been about how you can do it better. The rest of it—and perhaps the best of it—is a permission slip: you can, you should, and if you’re brave enough to start, you will. Writing is magic, as much the water of life as any other creative art. The water is free. So drink. Drink and be filled up. 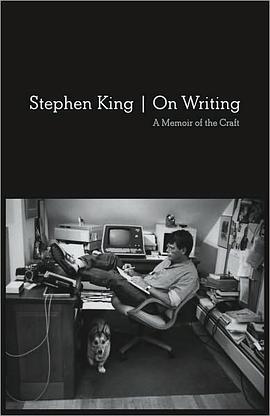